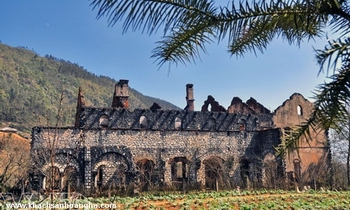 Used to be a missionary place and salvation of 12 female ascetic, Ta Phin Abbey ruins today carrying the mysterious beauty, mystical or extraordinary.

Located about 12 km from Sapa Vietnam, on the road to Ta Phin village you should not miss the opportunity to visit the ruins of Ta Phin Abbey. More than half a century, it was abandoned but still appealing tourists stop to admire the bold beauty of French colonial architecture behind the dust layer of time.

Ta Phin Abbey was home of 12 religious sisters of the Catholic deported from Japan, drifting away to Sapa. The nuns have actively contributed to research and disseminate the technical cultivation of temperate food plants, suitable to the climate and soil in SaPa such as black oat, vegetables, sweet potatoes and fresh fruits like grapes, apples, peaches...

The construction of the monastery was started in May 1942, at this time Vietnam was still under French rule, the building was under strict supervision of a military unit. The monastery was called the Virgin Peace Monastery. According to the original design there is a pretty big monastery, accommodating over 100 people to live and do religious work, however, in reality only a portion of the building was completed. Plans to build a guest room, a chaplain as well as farms have not yet been implemented. To 1947, due to unstable security situation, the group nuns were forced to evacuate to Hanoi, leaving the monastery devastated.

In the high mountain place covered by fog throughout the year, image of the ancient Abbey ruins hidden in the mist of the white clouds of Sapa, with dense vegetation makes it easy to think of the fairy tale once upon a time.

The Abbey was built with laterite therefore the walls and pillars are still strong to this day. The remains of the Abbey raises a question why this building was destroyed by war or deliberate action of human that the place become so desolate.

The structure of the monastery includes a west-facing chamber, a staircase connecting 3 floors, including a basement under ground. This is living room of the nuns, on the right of the building there is a vertical array linked with the living room, this may be the storage of food, furniture, and the kitchen of the monastery. The roof part is no longer existing, the only ancient mossy walls remains. In front of the building is a wide corridor, long, but not intact. trains to Sapa

Although Ta Phin Monastery was abandoned for a long time, the ancient setting and contemplative space of the place is very attractive to tourists.