You are here: Home » Travel Blog » On the road to Sapa

On the road to Sapa 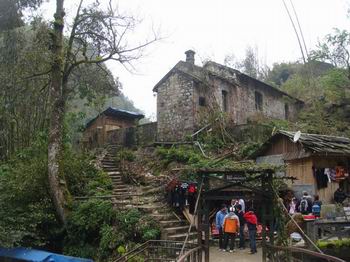 From when we first booked our flights last year in England we had heard good things about the mountain town of Sapa in North Vietnam. Our travel agent Tony told us it was somewhere he went and really enjoyed. Based on that and recommendations from our lonely planet and people we've met - we decided to book an overnight train to Sapa leaving at 9pm local time from Hanoi station. The journey takes around 9/10 hours with no stops. We had got a ticket for the 4 bed cabin - not as good as the private two beds but more room to breath than the six bed - all of which pack into the same sized cabin. We were in a cabin with two guys from Holland who we ended up chatting to all evening - we got a lesson in how a dutch co-operative bank works (one guys employer) though I found this quite interesting! I probably ended up getting around 7 hours sleep - which is not bad for a train - and a lot more than when we go by night bus!

The train arrives in at a station in Lao Chi - a Chinese border town - where you then get a mini bus transfer some 35km to Sapa in the mountains. Despite being bleary eyed and just waking up, we were ready for the rip of merchants who line the station road trying to charge you US$25 each for the journey - our guesthouse in Hanoi had advised us to pay only US$5 for us both max. After much walking around we found a guy who eventually agreed to take us for the 5 dollars in total. As we were putting our bags on he told us to keep quite about how much we were paying for the trip as others had paid the $25! At 5.30am and not wanting to get chucked off the bus - we kept quiet but were outraged at how blase the driver was about ripping these people off. The drive to Sapa provided amazing views through the mountains of the sunrise and got us both pretty excited about the trekking we had planned for the next two days. We arrived at around 7am I think and found our way to the guesthouse we had planned to get a room at. First impressions were that Sapa was bigger than I imagined a mountain town to be - and it was packed full of tribe folk in there full tribal outfits.... trying to sell you stuff or take you on a tour of sapa. In fact we had never seen persistence like it - this one couple of tribe ladies started following us when we got off the bus, when walking to the hotel, they then waited for us while we checked in and dumped the bags, and they followed us to a small cafe where we had some breakfast. It was only when we came out and I told them for the tenth time we "we're not buying anything" did they go away - even then asking if we buy from them later or tomorrow!

We spent much of the day exploring Sapa town - finding a good pizzeria and coffee shop along the way. We also spent a bit of time exploring the many outdoor gear shops - most selling fake North Face gear.. much of it you could not tell was fake. With most of our mobile wardrobe full of beach/hot weather clothes, we bought a couple of jackets and waterproof trousers - my north face jacket was only £12! We also spent some time trying to find a decent guide to do the hill tribe trekking with - we stumbled across 'the Sapa Sisters' on trip adviser as they had great reviews - I gave them a call and we planned to meet outside our hotel the following morning at 9am. We had two days of full trekking planned and a homestay in one of the tribe villages house. We put the camera on charge and got kitted up for the next few days trekking!.